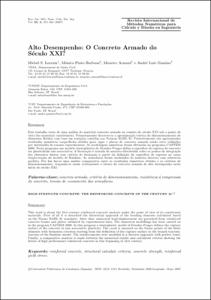 Show full item record
Lorrain, Michel S.
Pinto Barbosa, Mônica
Arnaud, Maurice
Gamino, André Luis
Document typeArticle
PublisherUniversitat Politècnica de Catalunya
Rights accessOpen Access
Abstract
This work is about the 21st century reinforced concrete analysis under the point of view of its constituent materials. First of all it is described the theoretical approach of the bending elements calculated based on the Norms BAEL 91 standarts. After that, numerical load-displacement are presented from reinforced concrete beams and plates validated by experimental data. The numerical modellings has been carried on in the program CASTEM 2000. In this program a elastoplastic model of Drucker-Prager defines the rupture surface of the concrete in non associative plasticity. The crack is smeared on the Gauss points of the finite elements with formation criterion starting from the definition of the rupture surface in the branch traction-traction of the Rankine model. The reinforcements were modeled in a discrete approach with perfect bond. Finally, a comparative analysis is made between the numerical results and calculated criteria showing the future of high performance reinforced concrete in this beginning of 21st century.
CitationLorrain, Michel S. [et al.]. Alto desempenho: o concreto armado do século XXI?. "Revista internacional de métodos numéricos para cálculo y diseño en ingeniería", 2007, vol. 23, núm. 3, p. 251-264.
URIhttp://hdl.handle.net/2099/10363
ISSN1886-158X
Collections
Share: