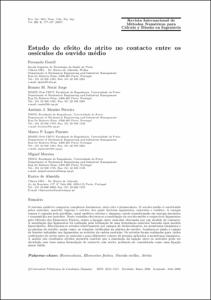 The human ear is a complex biomechanical system and is divided by three parts: outer, middle and inner ear. The middle ear is formed by three ossicles (malleus, incus and stapes), ligaments, muscles and tendons, that amplify the sound, sending the sound waves to the inner ear. In this work, a finite element modelling of the middle ear and ligaments was made. The connection between ossicles was achieved using contact formulation. The modelling of ligaments was based in a hyperelastic model. Studies based in the displacement field of the eardrum and footplate were made, as well as the rotation of the footplate. The stress field in the ligaments to the exterior of the ossicular chain was still analyzed. These studies were done for different friction rates, between the ossicles, and for different acoustic pressure values applied in the eardrum. We can conclude that the connection between the ossicles may be assigned by contact formulation including friction. For simulation proposes, we can assume a quasi-rigid connection between ossicles.
CitationGentil, Fernanda [et al.]. Estudo do efeito do atrito no contacto entre os ossículos do ouvido médico. "Revista internacional de métodos numéricos para cálculo y diseño en ingeniería", 2007, vol. 23, núm. 2, p. 177-187.
URIhttp://hdl.handle.net/2099/10358
ISSN1886-158X