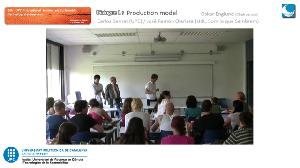 Olarieta Alberdi, José Ramón
Document typeAudiovisual
Other titlesEcological agriculture vs "conventional" agriculture
The case for agroecology
Rights accessOpen Access
Abstract
Due to global food shortages, some stakeholders defend industrial agriculture versus agroecology Can agroecology organic production sustain the global population without increasing the land currently under cultivation? Agriculture can be described in terms of two competing models: On the one hand, the industrial model operates within a productivist industrial discourse. Input intensive monocultural methods have resulted in ecological and socioeconomic negative externalities. These affect not only ecosystem services and rural populations but also reverberate throughout the agrifood system. On the other hand, agroecology can be placed within a holistic paradigm that promotes interdisciplinary collaboration between researchers, growers, consumers and other stakeholders to work towards an agrarian sector that operates under ecological and socioeconomic principles. An important argument made by proponents of the industrial model is that ecological models of agriculture do not produce as much food as the conventional model and therefore would cause global food shortages if implemented on a large scale.Questions to speakers 1- Who should benefit from the use of agricultural land? For what uses and needs? Who should decide? 2- What is the role of biotechnology in agriculture? And what is the role in agroecology? Angel and/or devil?
Description
Diàleg
SubjectsAgricultural ecology, Food production and natural resources, Food Industry, Agricultura sostenible, Aliments -- Producció
URIhttp://hdl.handle.net/2099.2/3177
Collections
Share: