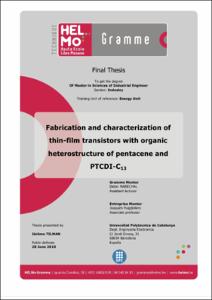 Document typeMaster thesis (pre-Bologna period)
Rights accessOpen Access
Abstract
This final thesis aims to advance research on the use of organic materials to produce devices such as OTFTs (Organic Thin-Film Transistors) or solar cells. Therefore, several OTFTs were performed to investigate the behavior of two organic semiconductors: pentacene and N,N′-ditridecyl-3,4,9,10-perylenetetracarboxylic diimide (commonly called PTCDI-C13). They were used alone or together to form some OTFT samples (simple and with heterostructure). Good electrical characteristics were found by measuring. Regarding multilayer OTFTs, ambipolar behavior were found, what is very interesting. The innovation of this project lies in the fact that all the manufacturing steps were performed at low temperature, including the dielectric (around 150°C) composed of Al2O3. It should be noted that ambipolar devices have never been carried out at less temperature. Finally, the samples were submitted to the lighting of different LEDs, chosen according to the wavelengths absorbed by each semiconductor. The principal aim of this final thesis part is to see if it can be interesting to use these materials in solar cells and should be seen as an introduction for further study.
SubjectsOrganic semiconductors, Semiconductors orgànics
URIhttp://hdl.handle.net/2099.1/9808
Collections
Share: