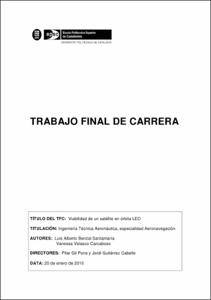 The present work analyses the requirements related to the orbit and the effects of the space radiation on Polosat, a toy-model satellite whose main goal is to monitor and image the Earth Poles. Our main objective has been to work on the so-called phase A of the design of a space mission, in which a preliminary study of the viability and characteristics of the mission is made. We present this project as a coordinated work due to the fact that its competition required the use of two relatively complex software tools, as well as the achievement of extra theoretical background on orbital mechanics, radiation and its effects. One of the software tools was STK (Satellite Tool Kit). It allows to compute with realism and high degree of accuracy the time evolution of the kinematics of an object in orbit around the Earth. The other tool was SPENVIS (Space Environment Information System). It also computes the time evolution of the orbital parameters of an object -although with less option for realism and accuracy than STK, and the characteristics of the incident radiation and its effects of the orbiting object. Both software tools are used in professional and academic environments and, therefore, becoming familiar with them and their use has been an important and useful part of our work. We compare the results that STK and SPENVIS yield for the computation of the orbital kinematics in the cases where both tools are appropriate (cases with negligible atmospheric drag and limited intervals of time). We check that in such cases STK and SPENVIS results yield a very good agreement and, most importantly, we have found the procedure in which results from STK can be transferred to SPENVIS, in order to model the situations we are interested in. As we show, by using both codes, we can take advantage of both the powerful numerical tools of STK in order to study orbital mechanics, and the capabilities of SPENVIS in order to model the incidence of radiation and its effects on the spacecraft. Finally, we have concluded that both STK and SPENVIS are convenient tools for developing the proposed project and have determined the way in which we can use them in order to accomplish our objectives.
SubjectsArtificial satellites, Satèl·lits artificials
URIhttp://hdl.handle.net/2099.1/9653