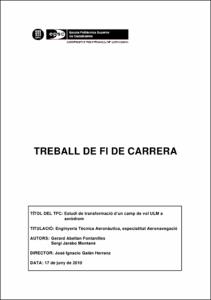 Document typeBachelor thesis
Rights accessOpen Access
All rights reserved. This work is protected by the corresponding intellectual and industrial property rights. Without prejudice to any existing legal exemptions, reproduction, distribution, public communication or transformation of this work are prohibited without permission of the copyright holder
Abstract
The main objective of this project is to provide the necessary documents to request the appropriate authority of the Generalitat de Catalunya to do the drawing up of a Master Plan for an aerodrome in the village of Castell de Santa Maria, in the Segarra area. The Departament de Política Territorial i Obres Públiques wrote the Pla d’Aeroports, Aeròdroms i Heliports 2009 – 2015, which plans all the actions to be developed by the Generalitat de Catalunya in the field of airport infrastructures of its jurisdiction. In than plan, the future aerodrome of Castell de Santa Maria is mentioned, with its viability still to be analyzed. Currently, in the same plot of land where the aerodrome is planned to be built, there is a landing field for ultra light aircraft of private ownership, with a nonpaved runway and a small area to park the aircraft. The objective is to convert it into a 1A aerodrome for visual flight, as well as making it able to handle middle sized helicopters operating according to performance class 3 standards. Initially, there is a chapter dedicated to analyze the legal framework regarding the establishment of an aerodrome and a heliport of private ownership, according to the Spanish law 14/2009 of July 22nd, of airports, heliports and other airport infrastructures. Afterwards, the feasibility is studied, the meteorology of the area analyzed, and all the steps to elaborate a proper design in accordance with the predicted operations are taken, including the drawing up of the relevant plans. Finally, the environmental impact the building of the aerodrome would have on the surroundings is studied, taking into account the current legislation and studying the possible affectation on protected areas of natural interest nearby.
SubjectsAirports, Aeroports -- Catalunya
DegreeENGINYERIA TÈCNICA D'AERONÀUTICA, ESPECIALITAT EN AERONAVEGACIÓ (Pla 2003)
URIhttp://hdl.handle.net/2099.1/9649
Collections
Share: