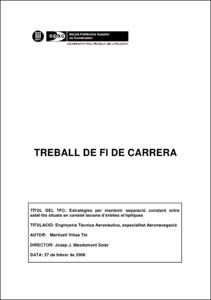 Except where otherwise noted, content on this work is licensed under a Creative Commons license : Attribution-NonCommercial-ShareAlike 3.0 Spain
Abstract
In the last years, the design of the new spatial missions in several study fields require of higher and more demanding levels of flexibility, autonomy, accuracy and resolution. The achievement of these values implies the use of very large, very huge, very heavy and very untransportable single structures. Launchers have a limitation for the transported mass, and to assemble structures in space is very expensive, difficult and quite impossible to develop. All these reasons turn a very ambitious mission in an unfeasible mission. One solution found to accomplish these requirements of flexibility, autonomy, accuracy and resolution is to send a formation of multiple cheaper, smaller, lighter and simpler to manufacture satellites. This configuration is called formation flight concept, and day by day it is taking more relevance in the spatial field. For this reason this document has been developed, with the objective of studying and designing a specific configuration case of satellites flying in formation for a future use in real missions. The structure studied in this document consists on a formation of two satellites in an elliptical orbit (extensible to a major number of satellites) whose separation distance has to remain constant in the most optimal way. To do this, a strategy consisting on a double rotation of the second (or daughter) satellite’s orbit has been developed. These rotations let to maintain the deviation from the desired nominal distance between acceptable limits.
SubjectsSatellites -- Atmospheres, Space flight, Espai exterior
DegreeENGINYERIA TÈCNICA D'AERONÀUTICA, ESPECIALITAT EN AERONAVEGACIÓ (Pla 2003)
URIhttp://hdl.handle.net/2099.1/9644
Collections
Share: