Assessment of oxygen production on the Moon through reduction of ilmenite 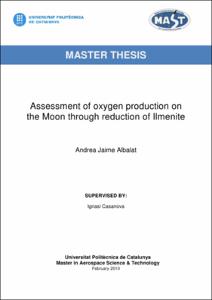 Except where otherwise noted, content on this work is licensed under a Creative Commons license : Attribution-NonCommercial-ShareAlike 3.0 Spain
Abstract
In the past 20 years, considerable attention been paid to returning to our natural satellite with robotic and, eventually, manned mission(s) not only to continue one the most scientifically fruitful exploration programs in history, but also to open new perspectives on engineering in planetary surfaces through lunar resource utilization. Among the so-called lunar resources, oxygen is probably one of the most needed and versatile. Applications of this gas range from fuel to life-support systems. However, oxygen in the Moon is present not as an atmospheric gas but combined with other elements forming minerals. Despite its very large abundance (almost 50% of the mineral material may be oxygen) its extraction and exploitation requires some technologies of not-so-straightforward application in a hostile environment such as the lunar surface. Among these technologies, hydrogen reduction of ilmenite (FeTiO3) has shown to be one of the most promising. This mineral is abundant in the high-Ti basalts, identified in the Apollo XI and XVII landing sites. Processing of ilmenite with molecular hydrogen at temperatures of about 800ºC yields to the formation of metallic iron, titania (TiO2) and water. This latter product, can be electrolyzed with relative ease to produce oxygen and hydrogen which, in turn, can be recycled back to the initial reduction process. Recent evidence of lunar water may add new hopes to considering the potential utilization of the ilmenite reduction process for oxygen extraction. Our work aims at providing additional information on the hydrogen and water estimations on the moon and on the mechanisms and kinetics of ilmenite reduction in order to optimize the operation of an eventual ilmenite processing unit (IPU) on the lunar surface. A variety of terrestrial ilmenites close in composition to the lunar samples have been characterized and treated with a Temperature-Programmed-Reduction (TPR) procedure. TPR allows a quantitative evaluation on the effect of temperature on the amount of hydrogen “absorbed” by a system, as well as the products and ultimately the efficiency of such reaction. In this paper, such parameters have been studied at temperatures between 100 and 900ºC, at different scan rates in order to assess the efficiency of the utilization of hydrogen on the lunar surface Scanning rates very high affects the equilibrium of the conversion, and very low ones change the expected behavior of the curve during the reduction and it can cause instabilities. A good value of scanning rate has been determined around 10C/min.
SubjectsOxygen Productions, Moon surface, Lluna, Oxigen
URIhttp://hdl.handle.net/2099.1/9643
Collections
Share: