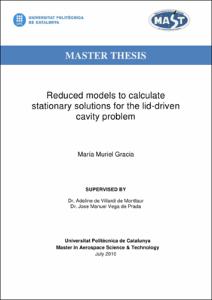 The lid-driven cavity problem is considered (movement of an incompressible fluid in a closed cavity where the upper lid is moved laterally with constant velocity). For moderate Reynolds numbers the system reaches a stationary state. The stationary state of the system will be studied depending on two non-dimensional parameters, the Reynolds number and the enlargement of the cavity. The equations of the evolution will be discretized using Chebyshev polynomials. In the first place, we will check that the stationary states reached can be described by linear combinations of a few modes, calculated by proper orthogonal decomposition. The idea is to obtain a reduced model which will be, computationally talking, more effective than the original numerical method. To achieve this, we will project the equations of the movement on the manifold generated by the modes and solve the resultant equations. We will discuss the effectiveness of the method with respect to: a) the number of snapshots needed, b) the modes that we have to consider, c) the computational efficiency.
SubjectsComputational fluid dynamics, Reynolds number, Viscous flow, Aerodynamics, Aerodinàmica, Dinàmica de fluids
URIhttp://hdl.handle.net/2099.1/9631