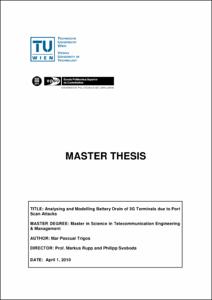 Document typeMaster thesis
Rights accessOpen Access
Description
In this thesis there is detected a threat in 3G mobile phone, specifically in the eventual draining terminal's battery due to undesired data traffic. The objectives of the thesis are to analyse the battery drain of 3G mobile phones because of uplink and downlink traffic and to model the battery drain. First of all, there is described how we can make a mobile phone to increase its consumption, and therefore to shorten its battery life time. Concretely, we focus in data traffic. This traffic can come from a legal application, or it can be caused by an attack designed to drain battery. Following, there is an introduction to theoretical concepts of 3G networks, Internet protocols, port scan and batteries. After that, there is defined an attack that can drain terminal batteries. Making use of this attack, there are realized several measures of battery duration in different conditions and different mobile phones. Measurement results are compared and analysed. Afterwards, there is modelled the expected battery life time of a mobile phone, having as input data the packets received and sent. There is also defined an "Energy Efficiency" variable that determines the amount of power that a running application in a mobile phone is consuming according to the data sent.
SubjectsGlobal system for mobile communications, Electric batteries, Sistema global per a comunicacions mòbils, Bateries elèctriques
URIhttp://hdl.handle.net/2099.1/9627
Collections
Share: