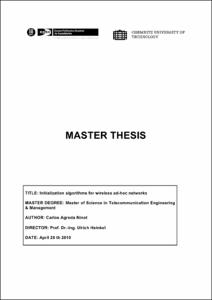 Document typeMaster thesis
Rights accessOpen Access
Description
The aim of this master thesis is the implementation of simulation models and the simulation of energy-efficient network initialization algorithms. First of all, it is presented a survey of state-of-the-art strategies for network initialization and exploration in wireless ad-hoc networks. Among the routing approaches presented in the survey it has been chosen the clustering-based approach due to it is the most suitable for ad-hoc sensor networks. Following are explained the features and properties of the clustering-based routing algorithms that have been selected for their implementation on this work. These implemented routing protocols are LEACH, LEACH-C, the solaraware extensions of both, HEED and a protocol based on direct transmission just as a reference in the comparison among the rest of them. On the other hand, all these routing protocols have been implemented and simulated using the OMNeT++ 4.0, which is a freeware discrete simulation environment. Subsequently, all the protocols have been simulated with different parameters and conditions to prove their functionality and to find out their behaviour in different sorts of sensor networks. Next, the simulations of the algorithms are compared among each other especially in terms of communication and energy efficiency. There are presented different comparisons such as LEACH and LEACH-C with their respective solar-aware extensions of both, a comparison between HEED with optimized parameters and non-optimized parameters, and finally a general comparison among One-hop, LEACH, LEACH-C and HEED. To sum up, some conclusions are drawn about the performance of the different protocols and some key points are given for future work. Furthermore, it is presented a brief study of the environmental impact this work may have.
SubjectsAd hoc networks (Computer networks), Sensor networks, Algorithms, Xarxes de sensors, Xarxes punt a punt (Xarxes d'ordinadors), Algorismes
URIhttp://hdl.handle.net/2099.1/9622
Collections
Share: