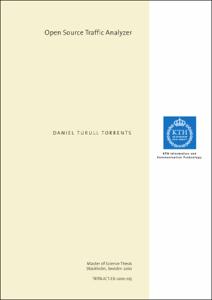 Document typeMaster thesis
Rights accessOpen Access
Description
Proper traffic analysis is crucial for the development of network systems, services and protocols. Traffic analysis equipment is often based on costly dedicated hardware, and uses proprietary software for traffic generation and analysis. The recent advances in open source packet processing, with the potential of generating and receiving packets using a regular Linux computer at 10 Gb/s speed, opens up very interesting possibilities in terms of implementing a traffic analysis system based on open-source Linux. The pktgen software package for Linux is a popular tool in the networking community for generating traffic loads for network experiments. Pktgen is a high-speed packet generator, running in the Linux kernel very close to the hardware, thereby making it possible to generate packets with very little processing overhead. The packet generation can be controlled through a user interface with respect to packet size, IP and MAC addresses, port numbers, inter-packet delay, and so on. Pktgen was originally designed with the main goal of generating packets at very high rate. However, when it comes to support for traffic analysis, pktgen has several limitations. One of the most important characteristics of a packet generator is the ability to generate traffic at a specified rate. Pktgen can only do this indirectly, by inserting delays between packets. Moreover, the timer granularity prevents precise control of the transmission rate, something which severely reduces pktgen's usefulness as an analysis tool. Furthermore, pktgen lacks support for receiveside analysis and statistics generation. This is a key issue in order to convert pktgen into a useful network analyser tool. In this paper, improvements to pktgen are proposed, designed, implemented and evaluated, with the goal of evolving pktgen into a complete and efficient network analysis tool. The rate control is significantly improved, increasing the resolution and improving the usability by making it possible to specify exactly the sending rate. A receive-side tool is designed and implemented with support for measurement of number of packets, throughput, inter-arrival time, jitter and latency. The design of the receiver takes advantage of SMP systems and new features on modern network cards, in particular support for multiple receive queues and CPU scheduling. This makes it possible to use multiple CPUs to parallelize the work, improving the overall capacity of the traffic analyser. A significant part of the work has been spent on investigating low-level details of Linux networking. From this work we draw some general conclusions related to high speed packet processing in SMP systems. In particular, we study how the packet processing capacity per CPU depends on the number of CPUs. This work consists of minimal set of kernel patches to pktgen.
SubjectsTelecommunication--Traffic--Evaluation, Linux, Operating systems (Computers), Xarxes -- Anàlisi, Linux (Sistema operatiu)
URIhttp://hdl.handle.net/2099.1/9565
Collections
Share: