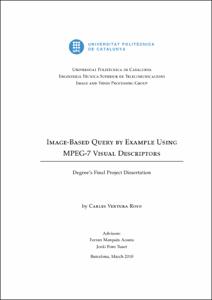 Except where otherwise noted, content on this work is licensed under a Creative Commons license : Attribution-NonCommercial-NoDerivs 3.0 Spain
Abstract
This project presents the design and implementation of a Content-Based Image Retrieval (CBIR) system where queries are formulated by visual examples through a graphical interface. Visual descriptors and similarity measures implemented in this work followed mainly those defined in the MPEG-7 standard although, when necessary, extensions are proposed. Despite the fact that this is an image-based system, all the proposed descriptors have been implemented for both image and region queries, allowing the future system upgrade to support region-based queries. This way, even a contour shape descriptor has been developed, which has no sense for the whole image. The system has been assessed on different benchmark databases; namely, MPEG-7 Common Color Dataset, and Corel Dataset. The evaluation has been performed for isolated descriptors as well as for combinations of them. The strategy studied in this work to gather the information obtained from the whole set of computed descriptors is weighting the rank list for each isolated descriptor.
SubjectsImage processing -- Digital techniques, MPEG (Video coding standard), Imatges -- Processament -- Tècniques digitals, Estàndard MPEG
DegreeENGINYERIA DE TELECOMUNICACIÓ (Pla 1992)
URIhttp://hdl.handle.net/2099.1/9453
Collections
Share: