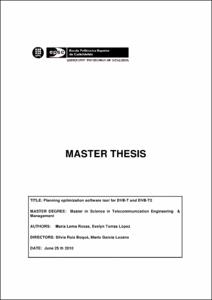 Document typeMaster thesis
Rights accessOpen Access
Description
Nowadays the implementation of the Digital Terrestrial Television network is an actual fact in the Spanish territory. Its development is crucial for the digital transition in those countries which mainly depend on the terrestrial networks for the reception of multimedia contents. With the aim of giving the users a high quality signal but with an economic cost reduced for the operator arises the necessity of an optimization of the transmission network. In this way, there are variables that can be modified to obtain this goal, some of them are uncontrollable by the operators and the others are susceptible of optimization. In this last group, it can be found the static internal delays of the transmitters which are of special interest because changes can be done with cost zero. The main objective of this project is the design and implementation of a Planning optimization software tool that adjust the variable of the static delay in the transmitters of a digital broadcasting network in order to minimize the self-interfered areas and with the correspondent increase in coverage. The Planning optimization software tool makes use of the metaheuristic algorithm and can obtain different layers of study with its corresponding results. This report describes the problems raised by the current network, the algorithm adapted to the needs of the network to optimize, the implementation of the simulation platform as well as its subsequent validation stage, including several graphical results that allow the evaluation of the improvements introduced over the realistic scenario tested. Finally it has to be mentioned that this work has been performed within the context of a project called FURIA, which is a strategic research project funded by the Spanish Ministry of Industry, Tourism and Commerce.
SubjectsDigital television, Television --Transmitters and transmission, Orthogonal frequency division multiplexing, Televisió digital terrestre, Tractament del senyal
URIhttp://hdl.handle.net/2099.1/9428
Collections
Share: