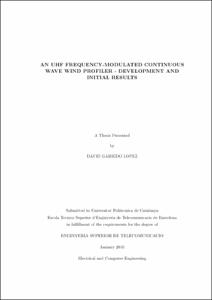 Show full item record
Garrido López, David
Tutor / director / evaluatorFrasier, Stephen J.
Document typeMaster thesis (pre-Bologna period)
Rights accessOpen Access
Abstract
The measurement of winds and processes taking place in the atmosphere is a fundamental requirement in both research and operational meteorology. This project is focused on the processes taking place in the lower troposphere called the atmospheric boundary layer (ABL). The ABL is important meteorologically in terms of assessing of convective instability. The entrainment zone at the top of the ABL acts as a lid on rising (and cooling) air parcels due to temperature inversion. An external mechanism such as geographically forced uplift, vigorous surface heating or dry lines, can break the entrainment layer, allowing the capped air parcels to rise freely. As a result, vigorous convection will begin producing severe thunderstorms. ABL research and studies help (i) develop and improve existing numerical weather prediction models, (ii) understand the transfer of heat, water vapor and momentum between the Earth and the atmosphere, (iii) refine the analytical description of turbulent processes and (iv) quantify the absorption and emission in the troposphere, which is a major factor in shaping climate on Earth. The effect of the troposphere on wave propagation has also been studied extensively for the purposes of improving radio communications. The main reason for FMCW radar development is the need for continuous monitoring of the winds and fields in the atmosphere, improving in-situ measurements. Conventional radar profiler technologies are usually able to make atmospheric measurements of the boundary layer, but preclude the lower part of the ABL, (around 150 meters). The Frequency Modulated Continuous Wave, Spaced Antenna (FMCWSA) Radar, that is being developed in University of Massachusetts - Amherst, at the Microwave Sensing Laboratory (MIRSL), will allow measurements of the lower part of the ABL. The use of FMCW radars is introduced in order to improve the limitations of pulsed radars. Pulsed radars are limited by the pulse-width and switching speed of the transmit-receive switches because of the use of common antennas for both functions. The pulsed nature of the radar dictates a higher transmitter power, and consequently the need for switches that are both faster and high powered. FMCW radar alleviate this problem by using separate antennas for transmit and receive, which also allows use at short ranges. The problem in dual-antenna systems is parallax at low altitudes due to the spatially separated antenna apertures, and some uncertainty in the actual sampling volume. The primary objective of this thesis is to explain the previous state of the radar, providing a detailed account of it. Then to present the current state of the radar with results and complete explanations to report conclusions.
Description
Projecte final de carrera realitzat en col.laboració amb Microwave Remote Sensing Laboratory
SubjectsRadarmeteorologia, Radar meteorology
URIhttp://hdl.handle.net/2099.1/9390
Collections
Share: