Industrial and Technological Transitions The Case of Concentrator Photovoltaic Technologies 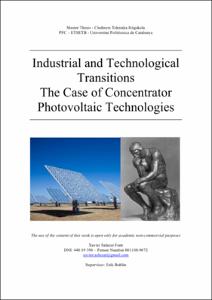 Document typeMaster thesis (pre-Bologna period)
Rights accessOpen Access
Abstract
Energy moves the World. Electricity demand and consumption keeps growing year by year to cover the needs for a wealthy development of all the countries. Nowadays, most of the energy is produced by means of fossil fuels, which entail a set of negative externalities such as their generated pollution and related health problems, the risk of global warming by the growing release of greenhouse gases and energy security provided by the unstable situation of many countries where raw material fossil fuel reserves is located. Shifting to a model including renewable technologies would help to reduce those externalities, by promoting more ecologically friendly systems and fostering the countries both economically and socially, as many related jobs would be generated and general wealth would be enhanced. Despite these positive effects, changing the model is not an easy issue, since incumbent technologies are currently well established profitable options, benefited by long developing time, compared to the more immature renewable energy options. In all, as stated in the literature (Geels, 2002), the inducement of a regime shift, not only depends on the availability of better technologies, but generally also needs a change in society to be ready to accept the novelties. Hence, making renewable energies competitive towards incumbent is not only matter of offering better technologies, but a critical policy challenge to be implemented long before their massive adoption. An attractive framework to for the analysis of such changes is the definition of a Technological Innovation System (TIS), which describes a number of functions to be set up by main actors, institutions and networks of an area of development in order to achieve its successful deployment. It includes 8 key aspects: the creation of new knowledge, the entrepreneurial experimentation, the materisalisation, the guidance of the direction of search, the supply of resources (such as capital and competencies), the creation of positive external economies, the legitimacy creation and the formation of markets. This framework has already been used to describe the successful deployment of wind industry and the take off of photovoltaics (PV)(Jacobson, 2004). The latter one, PV stands as a very elegant way of generating electricity directly from the sunlight in simple, modular, reliable systems. However, they are strongly constrained by the costs –and despite last years growing relevance, massive adoption is still limited up-to less than 0,2% of global electricity, and highly dependant on subsidies. One of the pathways for cost reduction is by means of optical concentration of the sunlight in smaller active surfaces. The concept is called Concentrating Photovoltaics (CPV) and sacrifices the simplicity of standard PV for the promise of highest performance and lower costs. This master thesis deals with the study of CPV technological option. It is an interesting study case for regime shift, as its evolution already shows several unsuccessful attempts to scale up. First one, in the late 70ies, an energy hungry world challenged by oil crises technologies triggered the research of first prototypes and pilot plants. However, they did not manage to meet expectations to continue the adoption after the crises passed, till the mid 90ies, when a more established PV industry nursed by state policies overtook again this research path, resulting in the Euclides project. Complexity of the system and the lack of well prepared markets to adopt the novelty kept the allocation of new resources away from this risky approach. But the founding from this project served to set up the direction of search, which resulted in the emergence of nowadays systems,based on high efficient multijunction cells, and which are finally able to turn into reality the promise of the highest performances ever reached. With the steady growth of PV opening the window of opportunity of tracked small utilities, combined with the silicon shortage has finally given CPV the necessary attention to attract resources and brought an amount of new entrants with the main aim to take off this technology. Thus, CPV technologies will have to overcome a new set of challenges related to preparation for growth. With a PV industry on the verge of becoming mature (which will happen the day PV costs reaches grid parity), subsidies will shrink as they become unnecessary for some applications. Instead, CPV will still need to lower down costs to bulk power costs, and external economies may not be able yet to provide necessary returns in order to scale up. Last important challenge is the emergence of competing options such as concentrated solar power (CSP) and thin film that could result CPV technologies to be locked out if they do not manage to maintain the learning curve. For all these reasons, this seems to be a critical point for CPV industry deployment.
Description
Projecte final de carrera fet en col.laboració amb el centre Chalmers Tekniska Högskola
SubjectsPhotovoltaic power generation, Energia solar fotovoltaica
URIhttp://hdl.handle.net/2099.1/8752
Collections
Share: