Development of the Feature Extractor for Speech Recognition 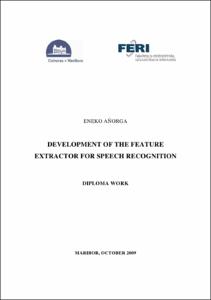 Except where otherwise noted, content on this work is licensed under a Creative Commons license : Attribution-NonCommercial-NoDerivs 3.0 Spain
Abstract
With this diploma work we have attempted to give continuity to the previous work done by other researchers called, Voice Operating Intelligent Wheelchair – VOIC [1]. A development of a wheelchair controlled by voice is presented in this work and is designed for physically disabled people, who cannot control their movements. This work describes basic components of speech recognition and wheelchair control system. Going to the grain, a speech recognizer system is comprised of two distinct blocks, a Feature Extractor and a Recognizer. The present work is targeted at the realization of an adequate Feature Extractor block which uses a standard LPC Cepstrum coder, which translates the incoming speech into a trajectory in the LPC Cepstrum feature space, followed by a Self Organizing Map, which classifies the outcome of the coder in order to produce optimal trajectory representations of words in reduced dimension feature spaces. Experimental results indicate that trajectories on such reduced dimension spaces can provide reliable representations of spoken words. The Recognizer block is left for future researchers. The main contributions of this work have been the research and approach of a new technology for development issues and the realization of applications like a voice recorder and player and a complete Feature Extractor system.
Description
Projecte final de carrera realitzat en col.laboració amb University of Maribor
SubjectsSpeech processing systems, Processament de la parla
DegreeENGINYERIA ELECTRÒNICA (Pla 1992)
URIhttp://hdl.handle.net/2099.1/8751
Collections
Share: