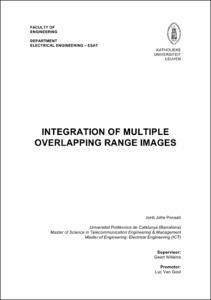 Show full item record
Jofre Ponsati, Jordi
Tutor / director / evaluatorWillems, Geert; Van Gool, Luc
Document typeMaster thesis
Rights accessOpen Access
Abstract
The work described in this document continues the developing of an online 3D reconstruction pipeline for the ESAT-PSI department of K.U. Leuven (Belgium). The idea of this 3D reconstruction pipeline is that only a digital photo camera and Internet connection is necessary for a user to reconstruct scenes in 3D. The process of obtaining a 3D model from the reconstruction pipeline involves the following main three phases: the data acquisition step of the desired object, the data 3D reconstruction of the partial views and the integration of partial reconstructions in one single 3D model. In the data acquisition phase, some regular images are taken by a consumer-grade digital camera of the target object and uploaded to the reconstruction server. In the reconstruction step, the position (and internal parameters) of the camera is computed for each image. Stereo algorithms are used to create partial reconstructions from each image that are all aligned in a common coordinate system. Both steps have already been developed. In the integration phase, we aim to all these partial reconstructions into single 3D model representation. It is this place that being developed in this Master Thesis. A volumetric integration technique for merging multiple aligned overlapping range images based on the Marching Intersections algorithm is implemented. Furthermore, several techniques are implemented to improve the quality of the 3D final representation. These techniques are: - A filtering procedure of the partial reconstructions. - A weighted function according to the data input confidence. - A triangular mesh-based hole-filling algorithm. - An algorithm for creating a texture by stitching color information from the set of RGB input images using camera’s visibility information. We analyze and obtain conclusions about the results of the implemented integration algorithm and how works the proposed improving techniques. Finally, we analyze a comparison between our application and the volumetric integration algorithm called VripPack.
SubjectsComputers, Pipeline, PiXELS 3D, Imaging systems, Representació visual en tres dimensions, Imatge, Tècniques d'
URIhttp://hdl.handle.net/2099.1/8525
Collections
Share: