Dense disparity estimation for spherical images based on belief propagation 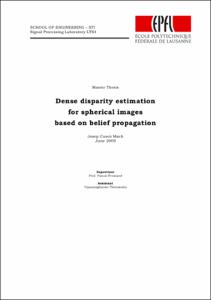 A lot of applications in computer vision are based on a pixel-labelling problem, such as stereo matching, image restoration or object segmentation. In the last years great advances have been achieved in dense disparity estimation, being Graph Cuts and Belief Propagation two of the most outstanding algorithms. Particularly, Belief Propagation has some characteristics which make it very interesting to deal with, i.e. powerful message passing and high flexibility. Furthermore, working with omnidirectional cameras, instead of standard cameras, a smaller number of images would be needed because of their wider field of view and it would allow reconstructing the 3D scene in an easier way. This project aims to adapt the Belief Propagation algorithm to spherical stereo images. In addition, as working with spherical images, we should take into account that these images will be projected on a sphere, being then the pixels at different distances between them. Thus, the project also aims to improve the algorithm adding a weighting function which considers the distance between the points on the sphere. The project contains the general description of the proposed framework as well as an analysis and evaluation of the results obtained after its implementation.
SubjectsComputer vision, Visió per ordinador
URIhttp://hdl.handle.net/2099.1/8093