Design and Characterization of Reliable RF-MEMS 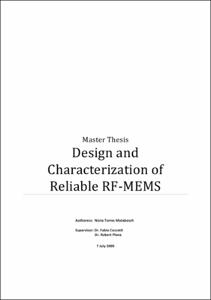 Except where otherwise noted, content on this work is licensed under a Creative Commons license : Attribution-NonCommercial-NoDerivs 3.0 Spain
Abstract
This thesis present a SPDT (Single Pole Double Throw) in Ku-Band designed for space applications. It was developed in LAAS-CNRS (Laboratoire d’Analyse et d’Architecture des Systèmes) from February 2009 to July 2009 in collaboration with CEA-Leti and ESA (European Spatial Agency) in the ESTEC contract 20832/07/NL/GLC. For the conception of the design, an analysis of available fabrication process is done so as to adapt the given measures to the simulation model. The fabrication problems are also detected and treated arriving to a simulation model which fits with measures. From this primary model some modifications are proposed so as to reach the desired RF specifications. Afterwards, some designs are proposed and discussed arriving to a final design which presents an input matching of 50dB at 13GHz while it is under 20dB in the range of interest. Insertion losses are about 0.2dB approximately in all the range so they are quite constant while isolation is under 15dB. This memory is organized in five chapters. The first one present the state of art in the routing circuits using MEMS and the last novelties in MEMS designs beginning with an introduction to the MEMS world. The second chapter is dedicated to the conception of a simulation model for Momentum taking into account the fabrication process. In the third one, the RF specifications and the available MEMS designs are presented while some modifications are proposed so as to reach the objectives. The fourth chapter describes different SPDT designs which are proposed and discussed presenting the final design. In the last chapter, some general conclusions are described as well as future work in this field is proposed.
SubjectsMicroelectronics, Microelectrònica
DegreeENGINYERIA DE TELECOMUNICACIÓ (Pla 1992)
URIhttp://hdl.handle.net/2099.1/8086
Collections
Share: