Properties and evaluation of fingerprinting codes 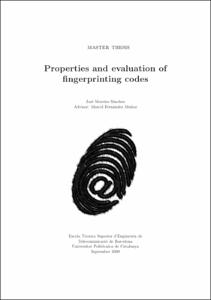 Document typeMaster thesis
Rights accessOpen Access
Abstract
The concept of data fingerprinting is of paramount importance in the framework of digital content distribution. This project deals with fingerprinting codes, which are used to prevent dishonest users from redistributing copyrighted material. After introducing some basic notions of coding and fingerprinting theory, the project is divided in two parts. In the first part, we present and analyze some of the main existing fingerprinting codes and we also discuss some new constructions. The study is specifically focused on the estimation of the minimum length of the codes, given the design parameters of the system: number of users to allocate, maximum size of the collusions and probability of identification error. Also, we present some theoretical results about the new code construction studied. Finally, we present several simulations, comparing the different codes and estimating what is the minimum-length code in each region. The second part of the project is devoted to the study of the properties of Reed-Solomon codes in the context of fingerprinting. Codes with the traceability (TA) property are of remarkable significance, since they provide an efficient way to identify traitors. Codes with the identifiable parent property (IPP) are also capable of identifying traitors, requiring less restrictive conditions than the TA codes at the expense of not having an efficient decoding algorithm, in the general case. Other codes that have been widely studied but possess a weaker traitor-tracing capability are the secure frameproof codes (SFP). It is a well-known result that TA implies IPP and IPP implies SFP. The converse is in general false. However, it has been conjectured that for Reed-Solomon codes all three properties are equivalent. In this paper we investigate this equivalence, and provide a positive answer for families of Reed-Solomon codes when the number of traitors divide the size of the code field
SubjectsDigital watermarking, Marcatge digital
Award-winningAward-winning
URIhttp://hdl.handle.net/2099.1/7983
Collections
Share: