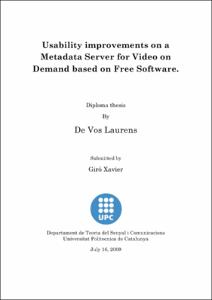 Except where otherwise noted, content on this work is licensed under a Creative Commons license : Attribution-NonCommercial-ShareAlike 3.0 Spain
Abstract
This final project encompasses the design of a Video on Demand system and is created in the laboratory of the Department of Signal Theory and Communications on the University of Industrial Engineering of Terrassa (EUETIT). An first version has already been released by David Vera. Unfortunately there have been missing some services in his project. The final system must provide a management interface for the system administrator to easily upload videos and edit their metadata, and also the possibility to consume the video content from a diversity of user interfaces, such as a web browser, a Set Top Box or, in the future, a mobile device such as an iPhone. After a thorough study of the structure of an video file the different video definition is not an issue anymore. Once the program, FFmpeg, has been installed and an specific codec selection has been made the generation of an video can been done by using the right code. This technology can be explored further for a thumbnail generation. Subsequently, a validation in terms of both integration with existing standards and technical performance has been realized, fulfilling the most of the initial expectations.
Description
This final project enhances an existing video on demand service with to new features that improve its usuability. Firstly, whenever a new high definition video is added to the system lower definition versions are automatically generated. By doing this, receiver adaptation is availablke in the form of spatial scalability. Secondly, a thumbnail is extracted for each video from a predefined time code in the video. The generated still images are further used and integrated in the web interface as well as remote Set Top Box interface.
SubjectsDatabases, HTML (Document markup language), PHP (Computer program language), SQL (Computer program language), Open source software, HTML (Llenguatge de marques), PHP (Llenguatge de programació), SQL (Llenguatge de programació), Programari lliure
DegreeENGINYERIA TÈCNICA DE TELECOMUNICACIÓ, ESPECIALITAT EN SO I IMATGE (Pla 2001)
URIhttp://hdl.handle.net/2099.1/7929
Collections
Share: