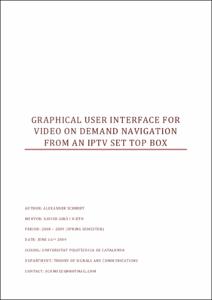 Document typeMaster thesis (pre-Bologna period)
Rights accessOpen Access
Abstract
This thesis will describe the final project I did in the second semester of the academic year 2008-2009 at the UPC (Universitat Politècnica de Catalunya) campus Terrassa, school of industrial engineering (EUETIT). The project was supervised by Xavier Giró and was done mostly in the lab of the department of ‘Signal Theory and Communications’ (TSC). The project is built on an existing project by David Vera, who made a video on demand server using a web browser as interface. Laurens De Vos, a fellow student of KaHo Sint-Lieven in Ghent (Belgium) where we study, also worked on this project. His goal was to improve the video on demand server implemented by David Vera to clean up the bugs and provide new capabilities but with better user interaction. My work on the other hand, has focused on the graphical user interface (GUI) of this project. The requirements of this project focus on the remote access to the video content at the server from a TV set top box (STB). These type of devices have become popular in the latter years acting as a receiver of video signals which are later displayed on a screen, in our case, a HDTV panel. The main goal of my part of this project is to create a GUI which is displayed and controlled by the set up box and that also manages the connections to a remote video database. The GUI is coded in web languages such as JavaScript, to manage the menu navigation, HTML represent the page, as well as PHP and JSON to connect to the database.
Description
This document described the implementation of a HTML/JS Graphical User Interface for the IPTV Set top Box ADB HD3800/HW. The interface accesses a remote video server and navigates through its catalogue, stored in a MySQL database. A system of menus has been implemented and the events generate by the remote controller are handled to choose the desired content. definició visibles en línia o en descàrrega.
SubjectsDatabases, Graphical user interfaces (Computer systems), HTML (Document markup language), JavaScript (Computer program language), PHP (Computer program language), SQL (Computer program language), Bases de dades, Interfícies gràfiques d'usuari (Informàtica), JavaScript (Llenguatge de programació), PHP (Llenguatge de programació), SQL (Llenguatge de programació)
URIhttp://hdl.handle.net/2099.1/7918
Collections
Share: