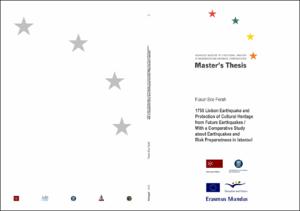 Show full item record
Ece Ferah, Füsun
Tutor / director / evaluatorOliveira, Daniel
Document typeMaster thesis
Rights accessOpen Access
Description
The 1755 Lisbon Earthquake, with an estimated magnitude of Mw ≈ 8.5, was one of the greatest earthquakes in history. It caused considerable damage in Lisbon, mainly concentrated in the Downtown due to the existence of densely arranged buildings on narrow streets; and on monumental structures due to the predominant earthquake frequencies. The ground movement was followed by a tsunami and fire, which increased the loss, both in terms of built environment and of human lives. Following the earthquake, Marquês de Pombal was given the responsibility for dealing with the emergency response, and later for the reconstruction of Lisbon. The survey known after his name and the answers given by the priests, provide even today an important source for studying the aftermath of the event. For the reconstruction of the city, Baixa and Chiado districts -which were almost completely destroyed- were razed, and rebuilt according to a new plan incorporating an orthogonal pattern with wider streets for increased safety. The buildings were constructed in a system called the Gaiola Pombalina, which wasn’t a new invention but an intelligent solution that could be “prefabricated”, and therefore correspond to a large-scale rebuilding process.
URIhttp://hdl.handle.net/2099.1/7911
Collections
Share: