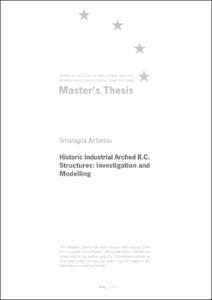 Show full item record
Antoniou, Smaragda
Tutor / directorDa Porto, Francesca
Document typeMaster thesis
Rights accessOpen Access
Description
The objective of the thesis is to present an investigation on historic arched reinforced concrete structures. The first part of the thesis consists of the study of the historical evolution of concrete as a construction material and its possible degradation mechanisms. Furthermore, there is an investigation on two historical reinforced concrete structures, located at the industrial zone of Marghera, close to the city of Venice. The investigation on one of the structures will include non-destructive and minor-destructive testing in order to estimate the quality and mechanical properties of concrete, and also the location of the reinforcement. For the other structure, information about the materials are available. The first building (complex “Città della Musica”) consists of two bodies of different height, forming a plan of an “L” shape. Each part is formed by a series of frames with an almost arched shape. One representative arched structures of each body has been sellected and modelled by means of the finite element analysis software Straus 7, in order to carry out a structural analysis and a response spectrum analysis. The second building (complex “Città del Cinema”) consists of a series of reinforced concrete arches that form the frame of the building. The building consists of only one part and forms a rectangular plan. From this building, a representative arch has been modelled using the finite element analysis software Straus 7 as well, and a structural analysis and a response spectrum analysis has been performed. In all the three cases the analysis was based on combination of actions according to contemporary european codes. The last part of the thesis includes comments on the condition of the buildings, based on the results of the investigations and the analyses.
SubjectsDurabilitat (Enginyeria), Arcs (Arquitectura), Monuments -- Conservació i restauració
URIhttp://hdl.handle.net/2099.1/7907
Collections
Share: