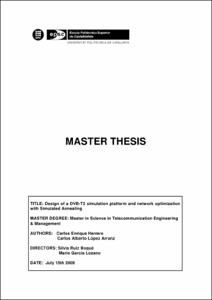 Except where otherwise noted, content on this work is licensed under a Creative Commons license : Attribution-NonCommercial-NoDerivs 3.0 Spain
Description
The implementation of the Digital Terrestrial Television is becoming a reality in the Spanish territory. In this context, with the satellite and cable systems, this technology is one of the possible mediums for the television signal transmission. Its development is becoming crucial for the digital transition in those countries which mainly depend on the terrestrial networks for the reception of multimedia contents. However, due to the maturity of the current standard, and also to the higher requirements of the customer needing (HDTV, new contents, etc.), a revision of the current standard becomes necessary. The DVB organisation in collaboration with other entities and organisms has developed a new standard version capable to satisfy those requirements. The main objective of the project is the design and implementation of a physical layer simulation platform for the DVB-T2 standard. This simulator allows the theoretical evaluation of the new enhanced proposals, making easier a later field measurement stage and the future network deployment. The document describes the implementation of the simulation platform as well as its subsequent validation stage, including large graphical results that allow the evaluation and quantification of the improvements introduced over the current standard version (DVB-T). On the other hand, and as future investigation lines, a solution for the future DVB-T2 network deployment is performed, enhancing the coverage capacity of the current network by the use of iterative meta-heuristic techniques. Finally it has to be mentioned that this work has been performed within the context of a project called FURIA, which is a strategic research project funded by the Spanish Ministry of Industry, Tourism and Commerce.
SubjectsDigital television, Standards, Televisió digital terrestre, Normes
URIhttp://hdl.handle.net/2099.1/7817
Collections
Share: