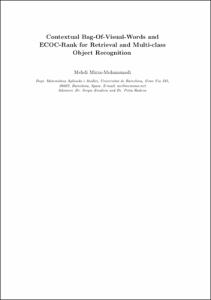 Multi-class object categorization is an important line of research in Computer Vision and Pattern Recognition fields. An artificial intelligent system is able to interact with its environment if it is able to distinguish among a set of cases, instances, situations, objects, etc. The World is inherently multi-class, and thus, the eficiency of a system can be determined by its accuracy discriminating among a set of cases. A recently applied procedure in the literature is the Bag-Of-Visual-Words (BOVW). This methodology is based on the natural language processing theory, where a set of sentences are defined based on word frequencies. Analogy, in the pattern recognition domain, an object is described based on the frequency of its parts appearance. However, a general drawback of this method is that the dictionary construction does not take into account geometrical information about object parts. In order to include parts relations in the BOVW model, we propose the Contextual BOVW (C-BOVW), where the dictionary construction is guided by a geometricaly-based merging procedure. As a result, objects are described as sentences where geometrical information is implicitly considered. In order to extend the proposed system to the multi-class case, we used the Error-Correcting Output Codes framework (ECOC). State-of-the-art multi-class techniques are frequently defined as an ensemble of binary classifiers. In this sense, the ECOC framework, based on error-correcting principles, showed to be a powerful tool, being able to classify a huge number of classes at the same time that corrects classification errors produced by the individual learners. In our case, the C-BOVW sentences are learnt by means of an ECOC configuration, obtaining high discriminative power. Moreover, we used the ECOC outputs obtained by the new methodology to rank classes. In some situations, more than one label is required to work with multiple hypothesis and find similar cases, such as in the well-known retrieval problems. In this sense, we also included contextual and semantic information to modify the ECOC outputs and defined an ECOC-rank methodology. Altering the ECOC output values by means of the adjacency of classes based on features and classes relations based on ontologies, we also reporteda significant improvement in class-retrieval problems.