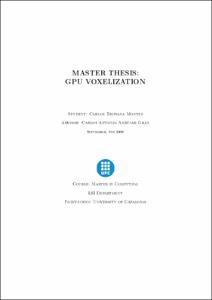 Document typeMaster thesis
Rights accessOpen Access
Abstract
Given a triangulated model, we want to identify which voxels of a voxel grid are intersected by the boundary of this model. There are other branch of implemented voxelizations, in which not only the boundary is detected, also the interior of the model. Often these voxels are cubes. But it is not a restriction, there are other presented techniques in which the voxel grid is the view frustum, and voxels are prisms. There are di erent kind of voxelizations depending on the rasterization behavior. Approximate rasterization is the standard way of rasterizing fragments in GPU. It means only those fragments whose center lies inside the projection of the primitive are identi ed. Conservative rasterization (Hasselgren et al. , 2005) involves a dilation operation over the primitive. This is done in GPU to ensure that in the rasterization stage all the intersected fragments have its center inside the dilated primitive. However, this can produce spurious fragments, non-intersected pixels. Exact voxelization detects only those voxels that we need. 1
SubjectsComputer graphics, Infografia
URIhttp://hdl.handle.net/2099.1/7721
Collections
Share: