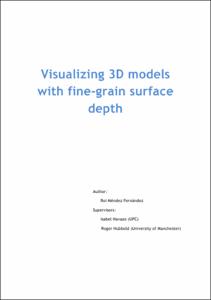 ; Hubbold, R. J. (Roger J.)
Document typeMaster thesis
Rights accessOpen Access
Abstract
The Daedalus Project has devised new methods for recovering 3D models of scenes from wide-baseline photographs. Current work is focused on developing novel shape-fromshading methods (referred to as Depth Hallucination) to add fine-grain surface detail to the reconstructed models. In doing this, our goal is to reconstruct models that appear visually correct under varying illumination, including subtle effects such as surface self-shadowing. Output from the current software is in the form of a dense polygon mesh and corresponding albedo and normal-depth maps. The main goal of this thesis is to explore GPU algorithms for rendering such models in real time or at interactive frame rates. The aspects explored include rendering with relief textures, and how best to store the raw data and process it on the GPU. We also study the best way to illuminate the scene in a realistic way, keeping the interactive frame-rates as the most important characteristic. Evaluation includes measures of performance, and test cases with varying illumination to compare the results of the project with those achieved with a global illumination algorithm. Another goal of the project is to use only free software. This will concern from the programming environment to the libraries used including the programs that we use for working with images
SubjectsThree-dimensional display systems, Image processing, Visualització tridimensional (Informàtica), Imatges -- Processament
URIhttp://hdl.handle.net/2099.1/7717
Collections
Share: