Development of a maintenance tool used for cold preservation of removed complete engines stored in an engine shipping stand, regarding simple handling and minimizing timely aspects 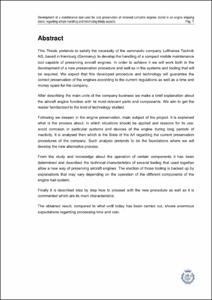 This Thesis pretends to satisfy the necessity of the aeronautic company Lufthansa Technik AG, based in Hamburg (Germany), to develop the handling of a compact mobile maintenance tool capable of preserving aircraft engines. In order to achieve it we will work both in the development of a new preservation procedure and well as in the systems and tooling that will be required. We expect that this developed procedure and technology will guarantee the correct preservation of the engines according to the current regulations as well as a time and money spare for the company. After describing the main units of the company business we make a brief explanation about the aircraft engine function with its most relevant parts and components. We aim to get the reader familiarized to the kind of technology studied. Following we deepen in the engine preservation, main subject of the project. It is explained what is the process about, in which situations should be applied and reasons for its use: avoid corrosion in particular systems and devices of the engine during long periods of inactivity. It is analysed then which is the State of the Art regarding the current preservation procedures of the company. Such analysis pretends to be the foundations where we will develop the new alternative process. From the study and knowledge about the operation of certain components it has been determined and described the technical characteristics of several tooling that used together allow a new way of preserving aircraft engines. The election of those tooling is backed up by explanations that may vary depending on the operation of the different components of the engine fuel system. Finally it is described step by step how to proceed with the new procedure as well as it is commented which are its main characteristics. The obtained result, compared to what until today has been carried out, shows enormous expectations regarding processing time and cost.
SubjectsAirplanes -- Motors -- Maintenance and repair, Avions -- Motors -- Manteniment i reparació
Provenance“Aquest document conté originàriament altre material i/o programari no inclòs en aquest lloc web”