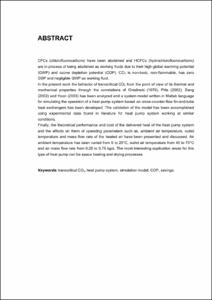 ; Frère, Marc
Document typeMaster thesis (pre-Bologna period)
Rights accessOpen Access
Abstract
CFCs (chlorofluorocarbons) have been abolished and HCFCs (hydrochlorofluorocarbons) are in process of being abolished as working fluids due to their high global warming potential (GWP) and ozone depletion potential (ODP). CO2 is non-toxic, non-flammable, has zero ODP and negligible GWP as working fluid. In the present work the behavior of transcritical CO2 from the point of view of its thermal and mechanical properties through the correlations of Gnielinski (1976), Pitla (2002), Dang (2002) and Yoon (2003) has been analyzed and a system model written in Matlab language for simulating the operation of a heat pump system based on cross-counter-flow fin-and-tube heat exchangers has been developed. The validation of the model has been accomplished using experimental data found in literature for heat pump system working at similar conditions. Finally, the theoretical performance and cost of the delivered heat of the heat pump system and the effects on them of operating parameters such as, ambient air temperature, outlet temperature and mass flow rate of the heated air have been presented and discussed. Air ambient temperature has been varied from 0 to 20°C, outlet air temperature from 40 to 70°C and air mass flow rate from 0.25 to 0.75 kg/s. The most interesting application areas for this type of heat pump can be space heating and drying processes.
SubjectsHeat pumps -- Mathematical models, Carbon dioxide, Bombes de calor -- Models matemàtics, Anhídrid carbònic
Provenance“Aquest document conté originàriament altre material i/o programari no inclòs en aquest lloc web”
URIhttp://hdl.handle.net/2099.1/7701
Collections
Share: