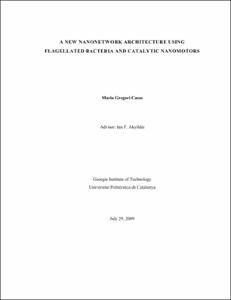 Show full item record
Gregori Casas, Maria
Tutor / directorAkyildiz, Ian F.
Document typeMaster thesis (pre-Bologna period)
Rights accessOpen Access
Abstract
Molecular communication has been recently proposed for interconnected nano-scale devices as an alternative to classical communication paradigms such as electro-magnetic waves, acoustic or optical communication. In this novel approach, the information is encoded as molecules that are transported between devices using different distance based communication techniques. For short distances (nm-mm ranges) there exist molecular motors and calcium signaling techniques to realize the communication between the nano-devices. For long distances (mm-m ranges), pheromones are used to transport information. In this work, the medium range is explored to cover distances from μm to mm and a molecular network architecture is proposed to realize the communication between nano-machines that can be deployed over different (short, medium and long) distances. In addition, two new communication techniques, flagellated bacteria and catalytic nanomotors, are introduced to cover the medium range. Both techniques are based on the transport of DNA encoded information between emitter and receiver by means of a physical carrier. A physical channel model in terms of propagation delay and packet loss probability has been developed for both techniques. Flagellated bacterium has been modeled as a two state automaton. This automaton is extended and used as the basis for the design of a novel nano-machine that is able to transport information among the nano-scale devices. Finally, a qualitative comparison of flagellated bacteria and catalytic nanomotors is carried out and some future research topics are pointed out
SubjectsNanotechnology, Molecular electronics, Nanotecnologia, Electrònica molecular
DegreeENGINYERIA DE TELECOMUNICACIÓ (Pla 1992)
URIhttp://hdl.handle.net/2099.1/7617
Collections
Share: