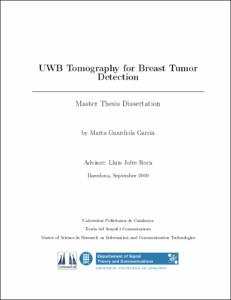 Document typeMaster thesis
Rights accessOpen Access
Abstract
Recent studies show that one in 13 women will suffer from breast cancer throughout his life. In spite of the increase of breast cancer incidence, the mortality is decreasing signi cantly, up to a point that nowadays 90% of localized breast tumors are curable. Nevertheless a tumor only can be cured when is detected in his early stage. In this sense, periodic scanning recommendations in woman over 50 are of vital importance. Currently, X-ray mammography is recognized as the preferred method, however it entails uncomfortable breast compression and exposure to low levels of ionization radiation, which can put some inconvenience for the woman to respect the recommendations. Microwave tomographic imaging techniques appeared as a solution to overcome this drawbacks while o ering a good trade-o between resolution and penetration depth. Moreover healthy and malignant breast tissue present at these frequencies high contrast in dielectric properties which is the magnitude to be imaged. In this Master Thesis a contribution to active microwave imaging for breast tumor detection is presented. Microwave imaging is a nonlinear inverse scattering problem, where complex permittivity of an object is reconstructed from the measured scattered eld produced by this object. To solve that problem, it can be either linearized with some approximation or solved with an iterative algorithm. By using an iterative algorithm, a cost function is optimized to obtain the solution, however it requires to introduce a priori information by assuming any property of the imaged tissue as known, which can pre-condition the solution. In this work, a novel UWB Hybrid Focusing algorithm is proposed, which uses Born approximation to linearize the problem and allows to obtain reconstructions of high contrasted large objects with a reasonable error. The idea behind UWB Hybrid focusing is the incoherent multifrequency combination of coherent multiview focused images. To do that, a number of microwave sensors (transmitters and receivers) are distributed on a circular region that may completely surround the object under investigation to measure scattered elds. Each sensor is alternatively activated as a transmitter, and the received signal at the rest of the sensors is captured, thus allowing to use information from all directions in the reconstruction procedure. UWB signals are proposed as illuminating signals since they are able to provide enhanced image resolution and more clutter rejection when compared to monofrequency reconstructions, which is traduced in the image as a more true and fair reconstrucion with less artifacts that could be interpreted as false positive detections. However the UWB extension of this algorithm has to be carefully done in order to avoid destructive interferences between the reconstructions at diferent frequencies by an incoherent combination. To verify the algorithm, reconstructions of progressively more realistic breast numerical phantoms have been made. When applying large and high contrasted realistic breast phantoms to any image reconstruction algorithm, a matching medium is required to minimize the re ected energy out of the breast. This aspect, together with the capability of the algorithm to deal with the inherent inhomogeneity in the breast, will also be inspected. Furthermore, motivated by the importance of detecting tumors at early stage, the ability to detect small inclusions will be tested. Experimental work is the culminative part of this dissertation. It covers the implementation of a two degrees of freedom imaging setup designed to deal with non-symmetric realistic objects in order to demonstrate the whole functionality of the algorithm. Another issue covered in this part, is the realization of breast phantoms progressively more realistic, restly to verify the functionality of the experimental setup and later to test the capability of the algorithm to detect tumors in phantoms emulating the relative contrasts exhibited by real women breasts.
SubjectsBroadband amplifiers, Breast -- Cancer -- Diagnosis, Breast -- Tomography, Amplificadors de banda ampla, Mama -- Càncer -- Diagnòstic, Mama -- Tomografia
URIhttp://hdl.handle.net/2099.1/7597
Collections
Share: