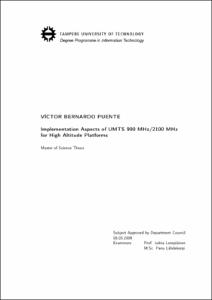 High Altitude Platforms (HAPs) represent an alternative to terrestrial mobile telecommunications. The aim of HAPs is to offer a feasible solution for the radio access layer of this kind of networks. The strong point of HAPs resides in the fact that they bring together the best features of terrestrial and satellite systems. HAPs have been widely proposed for deploying telecommunication services such as third generation mobile networks. In Europe, third generation of mobile communications system is using UMTS. It has being widely deployed in the last years but still there are certain areas where 3G coverage is not available. Especially in rural areas with low population density, where the operators did not find a cost efficient way to deploy UMTS services. As a result, UMTS in 900 MHz band emerges as a possible way to improve UMTS coverage for these areas, and combining with a HAP-based deployment, a cost efficient way for a widely deployment in sparsely populated and remote areas for 3G services. The work shown in this thesis is a comparison of network simulations obtained from the use of HAPs in the radio access network of UMTS using 900 MHz band and 2100 MHz band. The study was aimed to find the impact of carrier frequency on coverage for a single HAP scenario using different deployment strategies. An antenna study has also been done in order to see the impact of antenna beamwidth on UMTS system. The results obtained reveal that the decrease in the carrier frequency caused a clear increase in the coverage, when correct distance between cells was selected. Consequently the results obtained show the variation of the network performance with the separation between cells using both carrier frequencies, 2100 MHz and 900 MHz.