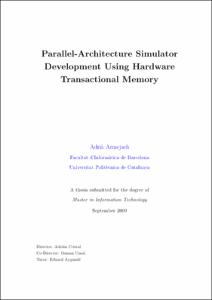 To address the need for a simpler parallel programming model, Transactional Memory (TM) has been developed and promises good parallel performance with easy-to-write parallel code. Unlike lock-based approaches, with TM, programmers do not need to explicitly specify and manage the synchronization among threads. However, programmers simply mark code segments as transactions, and the TM system manages the concurrency control for them. TM can be implemented either in software (STM) or hardware (HTM). STMs are more ﬂexible but suffer from serious performance overheads whereas HTMs are faster but limited due to hardware space constrains. We present an implementation of a HTM system, based on an existing protocol (Scalable-TCC), over a full-system simulator. We provide a memory system that allows for a conﬁgurable number of cache entries, associativity, cache-line size, and all the access timings in the memory hierarchy. Combined with a powerful statistics system that provides all the necessary information to extract conclusions from the transactional executions. We evaluate our HTM system using applications that cover a wide range of transactional behaviours and demonstrate that it scales efficiently up to 32 processors.
SubjectsParallel computers, Computers, Ordinadors paral·lels, Ordinadors
URIhttp://hdl.handle.net/2099.1/7464