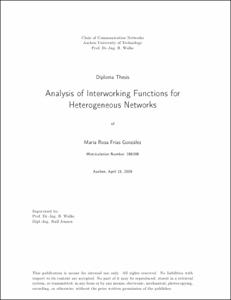 Future cellular radio networks will enable mobile terminals to communicate in environments populated by a multitude of devices, technologies and business actors using several radio interfaces. In this environment, one important task is to develop common control functions for elements in such networks. One of today's challenges is to provide service continuity in those highly heterogeneous networks. The service continuity can be measured in terms of a satisfied user criteria, which consists e.g. of the perceived end to end data packet delay, i.e. transport layer packet delay. The IEEE 802.21 standard focuses on the support of media independent handover for a broad range of technologies, but with strong emphasis on 802 technologies. The Framework Programme (FP)7 European Project OMEGA investigates the performance of home networks, which consist of technologies like Wireless Local Area Networks (WLAN), Hybrid Wireless Optics (HWO) or Power Line Communications (PLC). The aim of this work is to investigate in the context of the OMEGA project, which functions of the IEEE 802.21 standard are needed in order to co-operate in heterogeneous home networks. Subsequently, their performance in terms of QoS evaluation are developed. One of the most important functions is the path selection since it establishes the flow between source and destination and simultaneously, deals with the reservation of resources. In this work an approach for the identification and selection of possible paths using signal flow graphs analytically has been evaluated. The scheme is based on ad hoc networks and the proposed algorithm is Bandwidth Guaranteed Source Routing (BGSR). The analysis provides information about the required delay in the selection and helps to evaluate the influence of the route selection in the uninterrupted provision of service. Another concept to be considered is the path re-selection mechanism. A comparative analysis of centralized and decentralized solutions is developed using SFGs as well and basing the evaluation on the latency of both mechanisms.
SubjectsNetwork computers, Ordinadors, Xarxes d' -- Anàlisi
URIhttp://hdl.handle.net/2099.1/7426