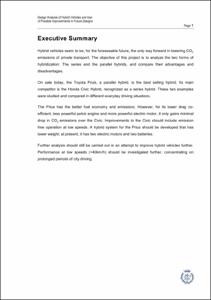 CovenanteeToyota; Honda
Document typeMaster thesis (pre-Bologna period)
Rights accessOpen Access
Abstract
Hybrid vehicles seem to be, for the foreseeable future, the only way forward in lowering CO2 emissions of private transport. The objective of this project is to analyze the two forms of hybridization: The series and the parallel hybrids, and compare their advantages and disadvantages. On sale today, the Toyota Pruis, a parallel hybrid, is the best selling hybrid. Its main competitor is the Honda Civic Hybrid, recognized as a series hybrid. These two examples were studied and compared in different everyday driving situations. The Prius has the better fuel economy and emissions. However, for its lower drag coefficient, less powerful petrol engine and more powerful electric motor, it only gains minimal drop in CO2 emissions over the Civic. Improvements to the Civic should include emission free operation at low speeds. A hybrid system for the Prius should be developed that has lower weight; at present, it has two electric motors and two batteries. Further analysis should still be carried out in an attempt to improve hybrid vehicles further. Performance at low speeds (<40km/h) should be investigated further, concentrating on prolonged periods of city driving.
SubjectsHybrid electric vehicles, Vehicles elèctrics híbrids
URIhttp://hdl.handle.net/2099.1/7410
Collections
Share: