Software support for video streaming from smartphone on small airship 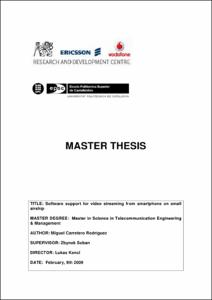 Except where otherwise noted, content on this work is licensed under a Creative Commons license : Attribution-NonCommercial-ShareAlike 3.0 Spain
Abstract
This project has been created to study and to solve two goals. The main goal has been streaming real video from a smartphone to a laptop and the second goal has been to control the airship electronics from the smartphone. To achieve the main goal of the project, firstly has been necessary realize a technologies study to select the better choice. The chosen technology has been to use of wi-fi, mainly due to the high transmission speed. Once the technology has been chosen, an ad-hoc wi-fi network has been created to be able to transmit wirelessly. After that, it has been necessary to study how to do the sending of the information. The first idea was using the User Datagram Protocol or Transport Control Protocol, at the beginning it seemed a good choice, because of was possible to achieve a communication between the smartphone and the laptop and a camera in record mode application was created. However, when the real video was to be sent to the laptop, it was not possible because it was not way to open the file while it was been created and there was not any temporal file. Then, another possibility had to be studied and it was the use of streamers. The Live555 Streaming Media is a set of C++ libraries which allows to stream real time from a device to a computer. After the hard work to run this application, it was running fine on the laptop, as well as, the laptop’s webcam was working fine. However, after try to develop a smartphone’s application was discovered that these libraries are not support for Windows Mobile. Therefore, a new way was discovered, the use of DirectShow which is architecture for streaming media, it seemed would work fine, but after the difficulty to compile a code, the smartphone was not detected and there weren’t so much information about how to solve the related problems. Finally, a real time software has been used to stream real video from the smartphone to a laptop. There have been two possibilities, Qik or AtekSoft Web CameraPlus. However, the second one was descarted due to the obligation to pay for use the software. The second goal was studied to develop a serial port application to be used by Infra Red port. However, it was possible that smartphone wouldn’t have IR Port, so a second alternative was studied and it was using the mini USB connection to achieve through a mini USB to USB adapter and an USB to serial port converter to communicate using serial port communication, but this possibility was not support by Windows Mobile. Then, a possible solution is described, it is using the smartphone like an USB device and on the other side (electronics) the use of an USB host and through drivers allows the communication. The smartphone used has been HTC Touch 3G which uses Windows Mobile 6.1 Operative System. The laptop used has been Dell XPS M1330, which uses Windows Vista Operative System the programming software has been Visual Studio 2008. In conclusion, the project has helped me to improve knowledge, on the one hand in my studies and on the other hand in my foreign language. It has been a good experience to work in a real project in the RDC department.
SubjectsStreaming video, Smartphones, Comunicacions mòbils, Sistemes de, Vídeo digital, Imatge -- Processament -- Tècniques digitals
URIhttp://hdl.handle.net/2099.1/7406
Collections
Share: