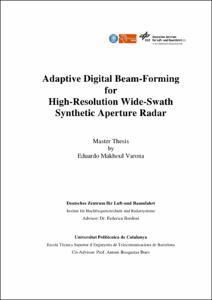 The thesis “Adaptive Digital Beam-Forming for High-Resolution Wide-Swath Synthetic Aperture Radar” is a project carried out in the Microwaves and Radar Institute (IHR) at the German Aerospace Center (DLR) The objective of this work is to investigate the possibility of applying direction of arrival (DOA) estimation methods to high-resolution, wide-swath Synthetic Aperture Radar (SAR) spaceborne systems, based on receive beam steering algorithm. In the conventional algorithm, called SCan-On-REceive (SCORE), the steering direction of the receive pattern corresponds to the expected DOA of the actual echo, which is computed assuming a stringent spherical Earth model. In presence of topographic height, SCORE works under model mismatch and losses of several dBs could be reached with respect to ideal operational conditions. This thesis analyses the possibility to overcome SCORE loss of performance by using a data-dependent, adaptive mechanism for receive beam steering. In particular, a new algorithm, denoted as Adaptive Digital Beam-Forming (ADBF), is proposed. This algorithm steers the beam based on the actual spatial distribution of the received signal power. The performance of the proposed algorithm is evaluated by Monte Carlo simulations and compared with that of the conventional, non-adaptive SCORE in different operational scenarios versus the main SAR system parameters. Moreover, based on Cramér-Rao Lower Bound analysis, the optimal performance achievable by the adaptive approach has been evaluated and used as a benchmark on the proposed algorith