Production and Characterization of Mechanical Properties of Metallic Glasses 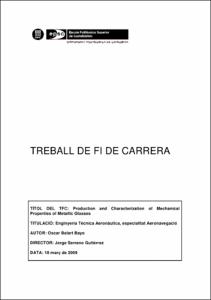 Show full item record
Belart Bayo, Oscar
Tutor / directorSerrano Gutiérrez, Jorge
Document typeMaster thesis (pre-Bologna period)
Rights accessOpen Access
Abstract
The metallic glasses represent a new class of materials. They were discovered in 1960 and they have interesting structural and mechanical properties, which made them attractive for applications in several fields. They have been used since a few decades ago because of its magnetic properties and now the mechanical ones have captured the interest of the scientific community. The objective of this project is to produce and characterize a Pd-based metallic glass, more specifically Pd77Si16.5Cu6.5, using different techniques. An Arc- Melting device, a setup that produces an electric arc employed to melt the constituent elements into balls, and a Melt-Spinner, a rapidly quenching machine to produce micrometer thick ribbons, were utilized for production of ribbons. In order to test the sample quality, they were analyzed with the Scanning Electron Microscopy (SEM) technique, capable of extract the actual composition with a small error. As characterization techniques, we employed Inelastic Neutron Scattering (INS) to unveil some of their vibrational properties. Also, a second prefabricated alloy, Ce70Al10Ni10Cu10, was characterized using a Dynamic Mechanical Analysis (DMA) which gave us information about its mechanical properties. Two fundamental parameters were found: the glass transition temperature and the fragility of the material. This project contains two basic parts: production and characterization, where the above mentioned methods and their results are explained. Furthermore, each part contains its own conclusions. Finally, the project conclusions are presented as a summary of the whole project with the most important data and some suggestions for further research on these exciting materials.
SubjectsMetallic glasses -- Magnetic properties, Scanning electron microscopy, Vidres metàl·lics -- Propietats magnètiques
DegreeENGINYERIA TÈCNICA D'AERONÀUTICA, ESPECIALITAT EN AERONAVEGACIÓ (Pla 2003)
URIhttp://hdl.handle.net/2099.1/6761
Collections
Share: