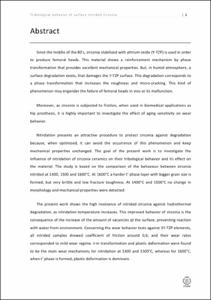 Show full item record
Puaud, Margerie
Tutor / director / evaluatorValle Chiro, Jorge Antonio
Document typeMaster thesis (pre-Bologna period)
Rights accessOpen Access
Abstract
Since the middle of the 80’s, zirconia stabilized with yttrium oxide (Y-TZP) is used in order to produce femoral heads. This material shows a reinforcement mechanism by phase transformation that provides excellent mechanical properties. But, in humid atmosphere, a surface degradation exists, that damages the Y-TZP surface. This degration corresponds to a phase transformation that increases the roughness and micro-craking. This kind of phenomenon may engender the failure of femoral heads in vivo or its malfunction. Moreover, as zirconia is subjected to friction, when used in biomedical applications as hip prosthesis, it is highly important to investigate the effect of aging sensitivity on wear behavior. Nitridation presents an attractive procedure to protect zirconia against degradation because, when optimized, it can avoid the occurrence of this phenomenon and keep mechanical properties unchanged. The goal of the present work is to investigate the influence of nitridation of zirconia ceramics on their tribological behavior and its effects on the material. The study is based on the comparison of the behaviour between zirconia nitrided at 1400, 1500 and 1600°C. At 1600 a harder t' phase layer with bigger grain size is formed, but very brittle and low fracture toughness. At 1400°C and 1500°C no change in morphology and mechanical properties were detected. The present work shows the high resistance of nitrided zirconia against hydrothermal degradation, as nitridation temperature increases. This improved behavior of zirconia is the consequence of the increase of the amount of vacancies qt the surface, preventing reaction with water from environment. Concerning the wear behavior test against 3Y-TZP elements, all nitrided samples showed coefficient of friction around 0,6; and their wear rate corresponded to mild wear regime. t-m transformation and plastic deformation were found to be the main wear mechanisms for nitridation at 1400 and 1500ºC, whereas for 1600ºC, when t’ phase is formed, plastic deformation is dominant.
Description
Doble titulació
SubjectsImplants, Artificial, Ceramic materials -- Testing, Zirconium, Implants artificials, Materials ceràmics -- Proves, Zirconi
URIhttp://hdl.handle.net/2099.1/6727
Collections
Share: