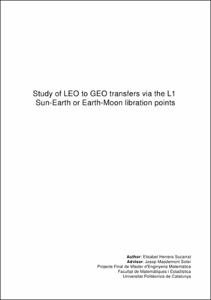 Document typeMaster thesis (pre-Bologna period)
Rights accessOpen Access
Abstract
A geosynchronous Transfer Orbit (GTO) is a type of transfer around the Earth between a low Earth orbit (LEO) and the geostationary orbit (GEO). After the launch to a LEO orbit, the orbit of spacecraft has the same inclination with respect to the equator, than the latitude of the launch site on the Earth where the spacecraft was launched. In order to transfer to a GEO orbit the inclination must be reduced to zero. During a GTO it may happen that because of many different problems, the spacecraft may not arrive to a GEO orbit and instead, it may remain in an inclined high elliptical orbit. The aim of this project is to compare in terms of _v, different ways of transfers between these elliptical orbits and the geostationary orbit. This masters thesis presents a brief study of different ways of transfer between an elliptical orbit and the geostationary orbit, using the restricted three body problem (RTBP) as the mathematical model. In this situation, a spacecraft moves under the gravitational forces of two massive bodies, which at the same time describe circular orbits around their common center of mass. The RTBP has 5 equilibrium points which have been studied in deep in the past. The results contained in this project are related with the equilibrium point L1, which is the one that lies between the two massive bodies.
SubjectsThree-body problem., Celestial mechanics, Problema dels tres cossos, Mecànica celest
URIhttp://hdl.handle.net/2099.1/6546
Collections
Share: