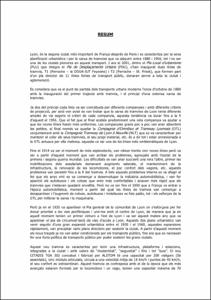 Document typeMinor thesis
Rights accessOpen Access
Abstract
Lyon, the second city in France after Paris, is well-known for its history of town planning, and although the tram network in operation there between 1880 and 1956 was not one of the first to be built worldwide, it was destined to become a noted feature of the city. In 2001, in accordance with the Plan Local d’Urbanisme (PLU), which in turn incorporates the Plan de Déplacement Urbain (PDU), two new tram routes began operation, the T1 (Parrache – la DOUA-IUT Feysinne) and the T2 (Parrache – St. Priest), the first of 11 high capacity public transport routes which are planned to cater for the city and conurbation. The first tram route of what was to become an extensive network of services in the city began to operate on 11 October, 1880, now considered to be the starting date for the city’s modern public transport system. Initially, each route was run by a different company and each company had its own system of operation. Soon there were several different track gauges in use, and this situation continued until the network ceased operation in 1956, although the fact that the different companies finally merged to form a single large operator led to the newer routes being more similar in character. The larger firms gradually absorbed the smaller operators, and in the end there remained only the Compagnie d’Omnibus et Tramway Lyonnais (OTL) and the Compagnie Tramway de Lyon a Neuville (NLT), one of the best-known companies in the city, which in spite of being owned by the OTL, operated independently and maintained its own equipment and livery.
SubjectsStreet-railroads, Tramvies -- Lió (França), Urbanisme -- Lió (França)
URIhttp://hdl.handle.net/2099.1/6360
Collections
Share: