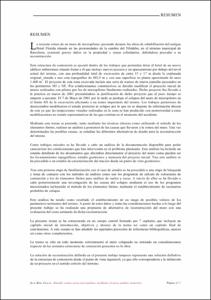 Except where otherwise noted, content on this work is licensed under a Creative Commons license : Attribution-NonCommercial-NoDerivs 3.0 Spain
Abstract
The retaining wall was executed within the construction works to build in front of the hotel a new building in the subsoil. This new building included a new access and a parking area under the actual ground level, with a total depth of excavation between 15 m and 17m from the original esplanade. The building was going to be placed at a topographic level of 492.5 m and it was going to have an area in plain of about 1,400 m2. The project included various sections of diaphragm walls executed in the perimeters SW and NE. Due to construction determinants it was decided to modify the initial project of pile walls by the minipiles ones. In March 2001 the justification of the project was presented and the projected started to be executed. On the afternoon of the 7th of March of 2001 the minipiles wall collapsed in the SW limit of the excavation, affecting an important stretch of itself. The subsequent debris removal modified the collapsed state in which the wall had remained, so no information is available about the previous state since the area was inspected after these modifications. Because of that, the subsequent visual inspections were not representatives of the state of the wall following its
SubjectsElements finits, Mètode dels, Micropilots, Murs, Mecànica dels sòls -- Mètodes numèrics
DegreeENGINYERIA DE CAMINS, CANALS I PORTS (Pla 1995)
URIhttp://hdl.handle.net/2099.1/6218
Collections
Share: