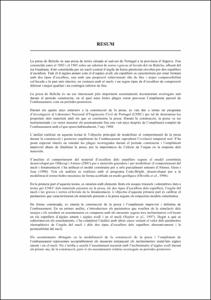 Document typeMinor thesis
Rights accessOpen Access
Abstract
Beliche Dam is an earth dam located in the southeast of Portugal, in the Algarve province. It was built between 1982 and 1985, over a ground composed of sands and gravels coming from the Beliche River, a tributary of the Guadiana River. It consists of a low plasticity clay core reinforced by two different sorts of rockfill, corresponding to the two different conditions upstream and downstream of the dam. Beliche Dam represents an interesting case because of the important documented subsidence happened during its construction phase, where strong rainfalls caused a partial filling of the reservoir, as well as in later episodes. During the previous 4 years to the construction of the dam, the Civil Engineering National Laboratory in Portugal (LNEC) carried out an in-depth test so as to determine the characteristics of the materials to be used. All the construction through, the dam was monitored and different episodes of subsidence were measured until 8 years after the complete filling of the reservoir, which is its operating condition, in 1988.
SubjectsDams, Preses
DegreeENGINYERIA DE CAMINS, CANALS I PORTS (Pla 1995)
URIhttp://hdl.handle.net/2099.1/6217
Collections
Share: