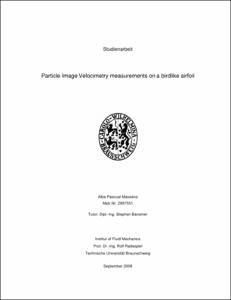 Document typeMaster thesis (pre-Bologna period)
Rights accessOpen Access
Abstract
The objective of this project is to study the aerodynamics around a birdlike airfoil. The variables to investigate are the turbulent shear stress and the pressure distribution. With this aim, two experiments were carried out in the LNB wind tunnel. The seagull hand pinion inspired the SG04 birdlike airfoil considered for this work. A flapping flight motion apparatus was used to force this wing heaving and pitching. First, an experiment to capture the boundary layer and determine the shear stress was done. Therefore, very accurate measurements with stereoscopic Particle Image Velocimetry technique were required. This exercise was performed with a flexible and non-flexible SG04 wing. Moreover, with the same method, a second experiment tried to capture a larger flow field around the whole flexible flapping SG04 airfoil, in order to determine the pressure distribution. To begin with, a theoretical background highlighting the most important features of moving airfoils and Particle Image Velocimetry is presented. The experimental setup, recording, data processing and results of both experiments conclude the second part of this work.
SubjectsAerofoils, Aerodinàmica
DegreeENGINYERIA TÈCNICA D'AERONÀUTICA, ESPECIALITAT EN AERONAVEGACIÓ (Pla 2003)
URIhttp://hdl.handle.net/2099.1/6132
Collections
Share: