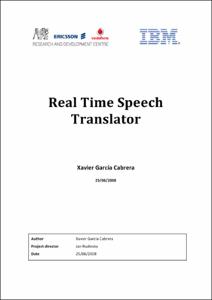 Document typeMaster thesis
Rights accessOpen Access
Abstract
This document is written to report on my work on the Real Time Voice Translator Project, the project I carried out as my final thesis project during the academic year 2007‐2008. During this period I have been working in the Research and Development Center (RDC) for Mobile Applications, a department of the Czech Technical University (CTU) in Prague. In the RDC I was a member of the Automatic Call Center Project (ACC Project) team, and within it, I was assigned to carry out the Real Time Voice Translator Project. The Automatic Call Center Project (ACC Project), now renamed to Voice2Web Project, is a project carried out by the Research and Development Center. The RDC is a department inside the Electro Technical Faculty of the CTU that carries out Research and Development projects regrding the Information Technologies (IT). Some of its partners are IBM, Vodafone and Ericson, who the RDC is doing projects for.  The ACC Project began on 2007 and its aim is to develop Voice Applications, within the IBM and RDC agreement, using IBM Voice Technologies and whatever open standards or open source software. IBM is an ACC Project partner and provides financing for it. It also provides hardware and software licenses to the ACC Project and gives us support. The members of the ACC Project are developing several Voice Applications at the same time, all them following the ACC Project purposes.   Although this document is focused on the Real Time Voice Translator Project, it will also explain in the introduction some aspects of the ACC Project. This is because the Real Time Voice Translator Project has a lot of points in common with it and it is worth, to understand it well, understand some points of the ACC Project as well.
SubjectsVoice, Translators, Processament de la parla, Traducció automàtica
URIhttp://hdl.handle.net/2099.1/6128
Collections
Share: