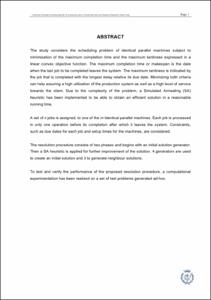 Document typeMaster thesis (pre-Bologna period)
Rights accessOpen Access
All rights reserved. This work is protected by the corresponding intellectual and industrial property rights. Without prejudice to any existing legal exemptions, reproduction, distribution, public communication or transformation of this work are prohibited without permission of the copyright holder
Abstract
The study considers the scheduling problem of identical parallel machines subject to minimization of the maximum completion time and the maximum tardiness expressed in a linear convex objective function. The maximum completion time or makespan is the date when the last job to be completed leaves the system. The maximum tardiness is indicated by the job that is completed with the longest delay relative its due date. Minimizing both criteria can help assuring a high utilization of the production system as well as a high level of service towards the client. Due to the complexity of the problem, a Simulated Annealing (SA) heuristic has been implemented to be able to obtain an efficient solution in a reasonable running time. A set of n jobs is assigned, to one of the m identical parallel machines. Each job is processed in only one operation before its completion after which it leaves the system. Constraints, such as due dates for each job and setup times for the machines, are considered. The resolution procedure consists of two phases and begins with an initial solution generator. Then a SA heuristic is applied for further improvement of the solution. 4 generators are used to create an initial solution and 3 to generate neighbour solutions. To test and verify the performance of the proposed resolution procedure, a computational experimentation has been realized on a set of test problems generated ad-hoc.
SubjectsParallel processing (Electronic computers), Mathematical optimization, Simulation methods, Simulated annealing (Mathematics), Processament en paral·lel (Ordinadors), Optimització matemàtica, Simulació, Mètodes de
ProvenanceAquest document conté originàriament altre material i/o programari no inclòs en aquest lloc web
DegreeENGINYERIA INDUSTRIAL (Pla 1994)
URIhttp://hdl.handle.net/2099.1/5716
Collections
Share: