Design and implementation of the Virtual European Parliament (VEP) prototype 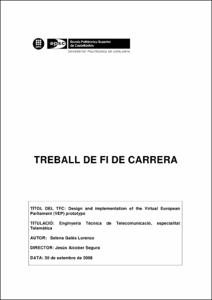 The project described on this document consists on a video-conference tool to represent the Virtual European Parliament (VEP) debate sessions and bring the citizen closer to the European Parliament, named MegaConference system. This project is included into the i2cat framework as a member of the VEP project. It is an initiative from three different regions (Sweden, Belgium and Spain) to involve the European citizens in the European Parliament activities using new technologies. The MegaConference system aims to reproduce European Parliament debate sessions between the three VEP regions. Every participant region (End Point) brings students and politicians together in a big room that consists on 3 screens where all the participants at the same time can be seen. The video from the person talking at one turn, Active Speaker, will be shown in the Central Screen. The MegaConference system is based on Digital Video quality. It is a quality improvement from the actual video-conference that allows to appreciate the non-verbal communication as gestures and facial expressions very important in a face to face conversation and in political environments. Employing Digital Video quality is able to project the video on big screens at the End Point. End Points are connected to an MCU that manages the video-streaming (received and sent) to every End Point plus an extra destination stream used for the video publication of the debate session for the users at home. To complement the MegaConference System regarding the objectives of to bringing any user closer to the debate sessions having a computer connected to internet as unique requirement, a MegaConference Chat Room has been developed. During the debate sessions this chat room receives the streaming from the video publication and show the course of the debate sessions allowing the participation using Instant Messaging from the users at home. A Test Plan has been performed assuring that the MegaConference system accomplishes the full requirements of the project. The complete MegaConference system has been tested and validated for a near set up in a real behavior with students and politicians.
SubjectsDigital Video, Videoconferencing, Videoconferència, Vídeo digital
URIhttp://hdl.handle.net/2099.1/5587