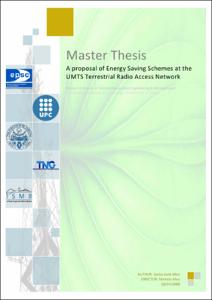 In UMTS environments the radio access network (UTRAN - UMTS terrestrial Radio Access Network -, in UMTS nomenclature) is the highest CO2 emitter. Is it possible to reduce these emissions? This study presents a proposal of energy saving schemes at this part of the UMTS network. The study concretely focuses on the possibility of switching off certain UTRAN elements based on the trafic load at every moment in order to make possible this energy saving. Special attention has been payed on the UMTS Base Stations (known as Nodes B in the UMTS standardization literature) and its controllers (also known as Radio Network Controllers, RNC). A typical situation where this case could be applied is in the ofice and Financial areas in cities. Trafic in these areas usually follow a certain periodic pattern, which could be, somehow, approximated to a curve. This curve would have its maximums at the ofice hours and its minimums specially at night. The difference of load between day trafic and night trafic can be very signiFicant. In fact, mobile operators design the network so to attend all the daytime trafic. It is not an exaggeration to say that according to night trafic these networks are over-dimensioned. The analysis has been made using well-known suitable propagation and trafic models in order to evaluate different scenarios such as motorways or urban microcells. Besides, the evaluation has been made according to different points of view, such as the percentage of shut down cells, the impact of the blocking probability target on the system performance or the number of users which are forced to make a handover at the switching moments. In addition, useful information about sustainability, global warming and mobile communications has also been included in order to complete the most practical parts of the work, as well as the most important features of the study, such as the consumptions along the UTRAN or how to make a power budget.
SubjectsUniversal Mobile Telecommunications System, UMTS (Universal Mobile Telecommunications System), Comunicacions mòbils, Sistemes de
URIhttp://hdl.handle.net/2099.1/5583